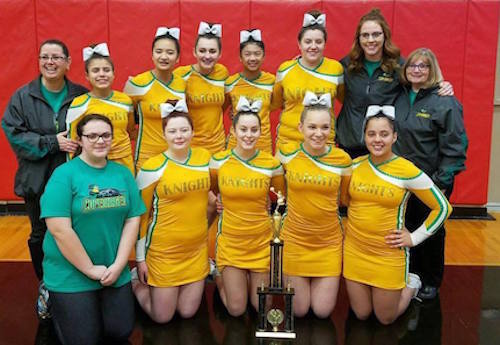 Our Copenhagen Competitive Cheer Team earned FIRST PLACE honors at the Chittenango competition this weekend. They defeated eight other schools in their division (Phoenix, Sandy Creek, Mexico, Oswego, Johnson City, ESM, South Lewis and Jamesville Dewitt). The team had the third highest score of the day with over 30 teams competing.

The Golden Knights will competing this Saturday at the Frontier League Competition. Competition will be held at South Lewis High School. Doors will open at 10 am. Competition starts promptly at 11:30 am. Let's pack the stands with BIG GOLD FANS!